John Kerry calls to stop “campaign of terror” in Venezuela 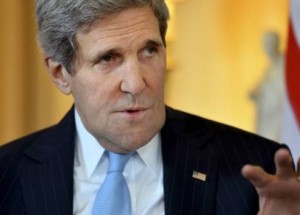 The U.S. Secretary of State, John Kerry told to a group of congressmen that the government of Venezuela must stop the “campaign of terror”, and respect the human rights.

The Chief of U.S. Diplomacy appeared at a hearing before the Committee on Foreign Affairs of the House of Representatives last Thursday and noted that the U.S. tries to “find a way to get the Government of Nicolas Maduro to dialogue with its citizens.”

“We think it’s time for the Organization of American States (OAS), the neighboring countries, the allies and other international organizations to appropriately focus on Venezuela,” he said.

Given the statements of Kerry, the Foreign Minister of Venezuela, Elias Jaua, answered harshly to Kerry blaming him for the violence in his country.

“We denounce before the world because you encourages violence in Venezuela (…) we will not lower the tone to any empire, we blame you, Mr. Kerry, of all the violence in our country,” said Jaua.