This Monday, February 22, the International Relations Commission, chaired by Fernando Flores, in session 137, continued the process of auditing the alleged irregular handling of investments by the Social Security Institute of the National Police (Isspol). For this purpose, he received Patricio Pazmiño, Minister of Government. 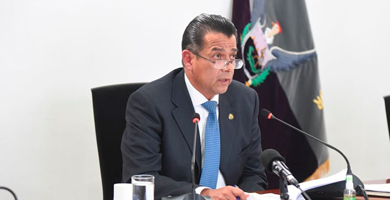 The appearance of the official was requested by the legislator César Carrión, who pointed out the need to determine the names of the possible perpetrators of this matter, even more so when saving money for Police and State personnel is involved.

He said he is concerned that ministers, commanders of the uniformed institution and administrators of Isspol, among other authorities, have not paid due and timely attention to this type of investment that began in 2014 and 2015, even more so when operations were large. magnitude, this is 532 million dollars. “The country demands transparency, but it seems that nothing has happened here, even Mr. Cherrez says that he does not owe a single penny,” he emphasized.

Patricio Pazmiño Castillo, Minister of Government, acknowledged that this case generated great connotation in the Police, in the Isspol and in Ecuadorian society. He specified that the investigation is the Prosecutor’s Office, therefore some facts are within the scope of the reserve.

Referring to the legal situation of the Institute, he said that it is a public entity, so its investments are subject to the Securities Market Law and the Public Planning and Finance Code.

He commented that there was no authorization from the Ministry of Economy and Finance for the investment of these resources, as provided in Article 168 of the Organic Planning Code. Pazmiño underscored that the bond purchase operations with the swap yields of the years 2016, 2017 and 2018 do not have the reports of the corresponding Isspol directorates.

He presented the observations to the “Swap Operation”, regarding the compensation of the operation and the internal debt bonds. He indicated that on December 28, 2020, Isspol should receive the payment of more than $ 20 million in interest, an obligation that until now remains unpaid by Jorge Chérrez’s companies, despite the fact that they have about 100 million excess cash flows collected.

The minister reiterated that, in the reports of the Risk Committee, an evaluation of the risks associated with this type of investment is not visible, allowing the delivery of resources from the pension funds of the police community. Therefore, the risk of the security to be traded was not evaluated, nor the counterparty risk, since it had to concentrate on knowing the use and destination that was going to be given to the resources raised.

The parliamentarian Fabricio Villamar recalled that in September 2020 he began the process of inspection and political control of Isspol’s investments, for which he requested the relevant information, which has not been provided. In this sense, he asked the Minister of Government to order the corresponding officials to respond to the request.

The president of the Sovereignty and International Relations Commission, Fernando Flores, announced that this week work would begin on the respective report of the case, in order to immediately transfer it to the consideration of the Plenary of the National Assembly.