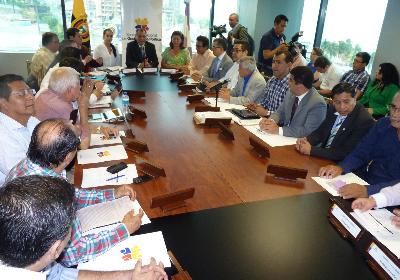 The Vice President Jorge Glas met on October 21 with municipal and provincial authorities to address issues relating with transport and infrastructure financing. The event was held in Manta.

One of the objectives of the meeting is to strengthen the political management through the socialization of guidelines and governance strategies in the territory. “We said this initiative would not be left in the past event (…) According to the manifesto signed by 190 Mayors, the intention of supporting a reelection of the authorities and that the citizens are the ones who decide how many times the authority may be re-elected according to representation,” said Viviana Bonilla, Secretary of Political Management.

Vázquez leads the polls with 42% of voting intentions