José Serrano dismisses the US Report regarding drug trafficking 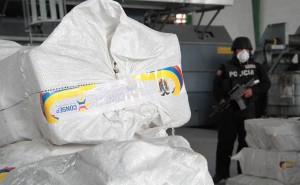 “That report is only the reflection of a reprisal because it is known that in Ecuador the police is not corrupt” declared José Serrano, the Interior Minister, in response to the US Report regarding the 2016 Strategy International Narcotics Control, submitted in the past days by the US State Department.

The document indicates that, even though Ecuador is not a very big drug producer, “the country allows transit to chemical resources, which are used in the production of illegal narcotics”. (I)