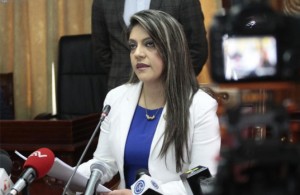 The Judge of the Constitutional Court, Wendy Molina, responsible for the processing of the draft constitutional amendments, requested information this Tuesday to: The Ministry of Labour Relations, the Ecuadorian Institute of Social Security, the National Planning Secretariat (Senplades for its Spanish acronym) and the Ministry of Security Coordination.

These two requests are related to the proposed constitutional amendments proposed by the ruling party, which in Article 11 states that the public sector workers are no longer under the Labour Code and become State workers.

The judge also asked the National Planning Secretariat (Senplades for its Spanish acronym) to report the how the monitoring of the objectives of public sector entities is fulfilled within the National Development Plan.

Furthermore, the judge asks the Coordinator Ministry of Security to report how the security policy is being implemented in relation to the coordination of the National Police and Armed Forces. This inquiry is related to Article 6 of the draft amendments, which states the inclusion of a text in the Constitution that indicates that “the military forces have as a fundamental mission to defend the sovereignty and national integrity and, additionally, support the comprehensive security of the State in accordance with the law”.