With a concentration on the outskirts of the Attorney General’s Office in Quito , members of the Social Justice movement filed a criminal complaint against four councilors of the National Electoral Council (CNE) . 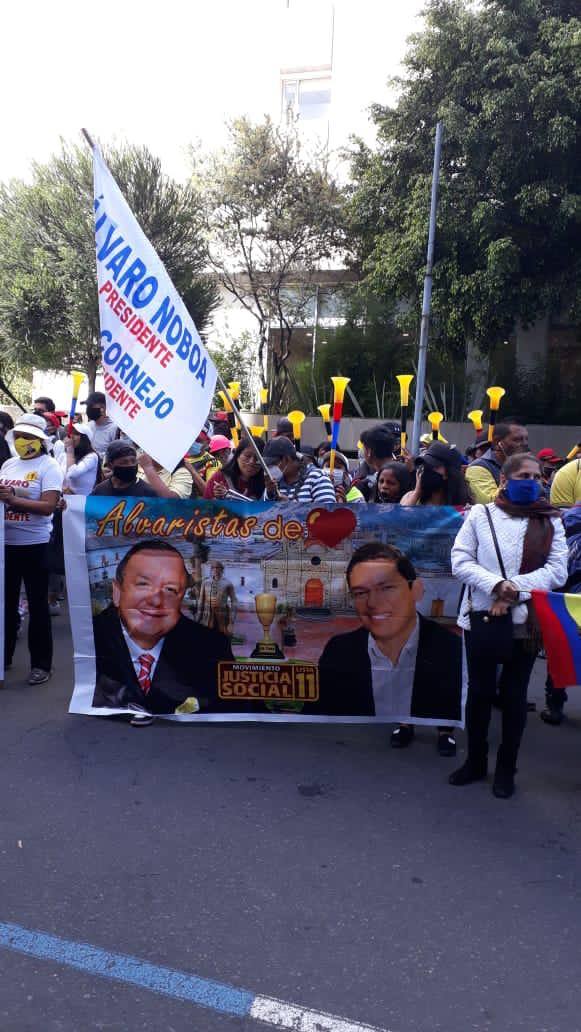 The complaint, filed on November 25, is for the crime of alleged contempt of the sentence of the Contentious Electoral Tribunal (TCE) that resolved to accept a subjective contentious electoral appeal of Social Justice and ratify its legal status. At the same time, he ordered the Council to adopt as comprehensive reparation “all the necessary administrative measures so that the political organization has the time and adequate means to carry out acts of internal democracy, registration and qualification of candidacies.”

For the movement, the CNE did not comply with that sentence and prevented the registration of businessman Álvaro Noboa as a candidate for the Presidency of the Republic.

Sylka Sánchez, spokeswoman for the political organization, specified that the complaint is against four councilors: José Cabrera, Diana Atamaint, Enrique Pita and Luis Verdesoto. He did not mention Esthela Acero.

This is because on November 12, the plenary session of the CNE, with the vote of the four members and the abstention of Acero, annulled a first resolution that enabled deadlines to proceed with the process to choose candidates for the 2021 general elections .

It was argued that the technological registration system was open to all political organizations, including Social Justice, so that the candidacies that were registered within the deadlines of internal democracy and registration will be processed.

This affected Noboa’s registration , whose documentation was submitted to the CNE on November 7, but it was not qualified because it had not been processed within the registration calendar, which ended on October 7 at 6:00 p.m.

“We have come to present the complaint against the directors, by article 282 of the Comprehensive Penal Code. We are not going to move from Quito until the CNE complies with the final judgment of the TCE. We come to ask the Prosecutor, Diana Salazar, to receive this complaint because the people cannot be mocked. The CNE cannot, with a resolution, overturn an enforceable sentence of the TCE ”, expressed Sánchez.

In an interview on Huancavilca radio on November 25, counselor José Cabrera explained that after it was decided to eliminate Social Justice and four other groups on the recommendation of an audit by the State Comptroller’s Office, a precautionary measure was issued.

But the TCE lifted this precautionary measure and the organization carried out its internal democracy. “In the three dignities they carried out internal democracy, and in 15 provinces. Social Justice only registered Andean parliamentarians and for provincial assembly members it registered in ten provinces. They did not register candidates for President and Vice President of the Republic, they did not register national assembly members, ”said Cabrera.

He also specified that if the CNE resolves to allow deadlines for the movement to regain its internal democracy “we would leave other political organizations defenseless that did comply with the procedures within the deadlines.”

At the moment, the TCE must resolve an appeal filed by Social Justice, against the resolution of the CNE so that Noboa’s participation is allowed. (I)