La monilla and the leaf rust diseases affect 170,000 hectares of coffee and cocoa 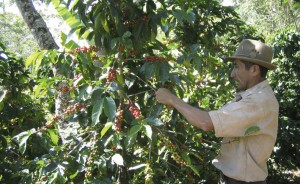 Crops of coffee and cocoa in Santo Domingo de los Tsachilas and coastal provinces were affected by the cold and continuous rains.

According to the Association of Cocoa producers of Santo Domingo, about 5000 hectares of cocoa were affected by la monilla between July and October 2015. In this province 16,770 planted hectares are recorded.

This situation occurs in Guayas, Manabi and Esmeraldas. Therefore, the Ministry of Agriculture, Livestock, Aquaculture and Fisheries (Magap for its Spanish acronym) declared the cocoa sector into a phytosanitary emergency on September 3rd, 2015.

Nationwide 4 million have been invested in the acquisition of 240,000 fungicide kits to be delivered free. These will be used on 170 000 hectares of cocoa and coffee that have problems due to la monilla, witches broom and rust diseases. In the country there are 97 000 hectares of coffee and 500 000 of cocoa.

The Provincial Directorate of Magap recognizes that climate change and the possible arrival of El Nino have proliferated diseases such as leaf rust (coffee crops) and la monilla (cocoa crops).