Labour code issued by Pinochet is reformed by Bachelet 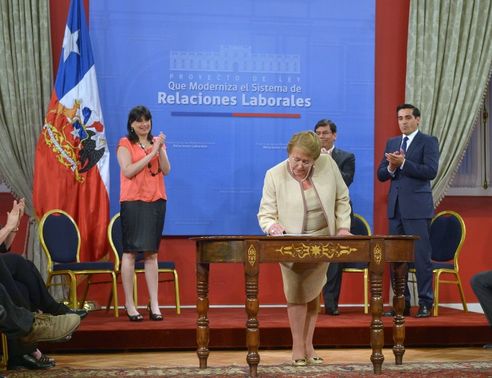 The president of Chile, Michelle Bachelet, signed on Monday a labor reform bill that modifies the labour code issued 35 years ago by Augusto Pinochet, in another of the transformative actions of her second term.

The bill impedes the replacement of striking workers, enshrined in the Pinochet´s legislation and which, in practice, limited to the extreme the right to strike of Chilean workers. It also restores the inter-collective bargaining.

“We’re paying off a debt we had with the workers of Chile,” Bachelet said when signing the draft law which must now be discussed in Congress.

The project is strongly resisted by the business community and has the approval of the Single Confederation of Workers (CUT), the largest multi sindical of the the country, which sees it as “a first step.”

The new law amends the Labor Code issued in 1979 by Pinochet, which reduced union interference to the minimum, prohibiting inter-companies collective bargaining and the right to strike only in the context of negotiations with the company.