A healthy population of land iguanas, including males, females and even hatchlings, roam Santiago Island, which was their home more than two centuries ago. 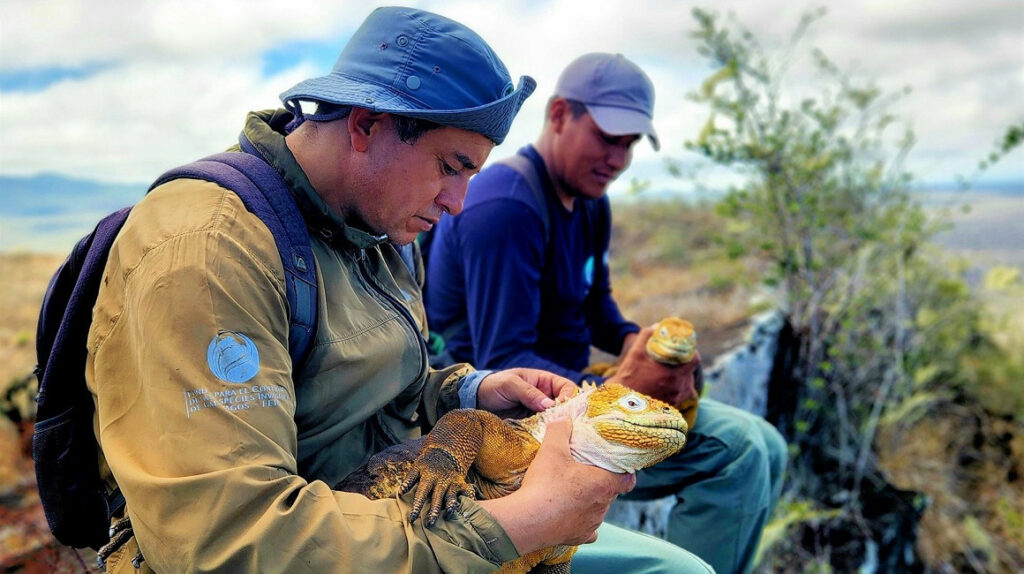 Three different species of land iguanas live on the Galapagos Islands, but only one is closely related to Darwin’s finches.

This is the species Colonophus subcristatus , which stretches its bodies in the sun and on rocks, letting the finches remove the ticks.

They lived in this way for millions of years until the naturalist Charles Darwin recorded them in 1835.

Then, in two expeditions, in 1903 and 1906, live specimens of land iguanas were no longer found on Santiago Island.

Unlike their friends, the finches, these iguanas, which can measure up to a meter in length, have become extinct on this island, the largest in the archipelago.

But that was until August 2022, when the Galapagos National Park gave the world good news : new specimens of land iguanas were found almost two centuries later.

“187 years later we are once again witnessing a healthy population of land iguanas, with adults, juveniles and neonates,” said PNG director Danny Rueda.

Why did they take so long to reproduce?

The appearance of land iguanas roaming Santiago Island is considered a milestone in the world of conservation. This species is on the red list with the category of vulnerable, it is also endemic to the Galapagos.

According to the PNG, the repopulation of the species would be the result of a reintroduction of 3,143 specimens, which lived on Seymour Island, made in 2019.

But why did they take so long to reproduce? What changed in two centuries?

The scientific adviser of the PNG, Luis Ortiz-Catedral, explains that there was not a reproduction problem with the land iguanas, but rather that “they became completely extinct from Santiago Island after Darwin’s visit.”

According to Ortiz-Catedral, there is no detailed chronicle of why land iguanas became extinct, but everything points to the fact that Santiago Island suffered an extensive process of degradation caused by invasive species.

And this in turn “had prevented the reproduction of healthy species, including iguanas,” says the PNG.

A turning year was 2000, when the island was intervened and a process was undertaken to “eliminate invasive species , such as goats, donkeys or pigs.”

In general, animals such as goats destroy the habitat or vegetation that iguanas feed on. While the pigs destroy the nests.

A land iguana lays between two and 20 eggs, and despite the fact that the female guards the nests or the male guards the territory, the pigs killed the young.

After the main animal threats on the island were eliminated, the iguanas had a happy ending. It is estimated that this species can live up to 55 years.

The profound impact of iguanas

Ortiz-Catedral, responsible for the expedition that registered the repopulation of land iguanas in Santiago, expresses that the island is already showing positive changes. “They have opened roads, removed soil and dispersed seeds,” says the researcher.

In addition, he explains that land iguanas are the second top or dominant herbivore in the Galapagos systems.

When the iguanas die or move from an island, grasses and other plants grow that do not allow the growth of endemic flora such as cacti.

“The plant dynamics that are coming in the coming decades will be important to study,” adds Ortiz-Catedral.