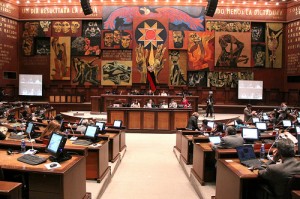 Mauricio Proaño, Vice-President of the Commussion for Food Sovereignty in the Assembly, said that in about 15 days they will havean advanced draft of the Land Law.

The latest draft which was discussed in the commission in January of this year contained 114 articles, which was titled Draft Law onRural Productive Lands and emerged from five draft laws that were introduced in 2012.

This document established a limit for land acquisition from the publication of the new legislation, with a base measuring Unit calledFamily Production, and whose extension would be set by the National Land Authority.

This project consists in the list of “structural” standards defined by Alianza PAIS earlier this year in the agenda of 23 laws that have to be approved in 2014.