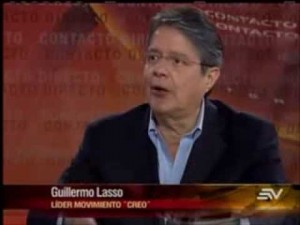 The former presidential candidate representing CREO political party Guillermo Lasso, announced that his political group is willing to collect signatures to support a popular consultation in order to know the public opinion on the package of amendments proposed by Alliance PAIS and on other topics of interest , such as dollarization andtransfer of pension funds to the Bank of IESS.

“CREO is willing to collect signatures for the people to speak out and say if they want to stop the controlling state,” said Lasso to Ecuavisa .

The former banker clarified he will assume the commitment to lead the process of collecting signatures, but at the right time. “CREO is willing to make a collection of signatures and seek a referendum in due course.”

Weeks ago, the group submitted to the Constitutional Court a written statement, which points out that what the ruling party has proposed are not amendments, but rather reforms and that a referendum should be convened.