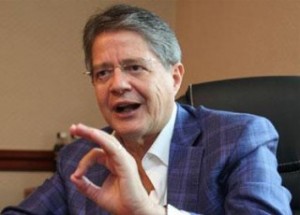 The leader of the movement CREO, Guillermo Lasso, demands a correction from President Rafael Correa on the statements of the Minister of Labour Relations, Carlos Marx Carrasco, who pointed at Lasso and labor leaders for pretending a death in the latest labor march of November 19.

“That is a false, reckless and malicious accusation … and I establish the responsability in the President, who has allowed that his Minister, who should handle a consensual dialogue, is dedicated to insult not only me but workers who convened a march where there was no one single stone, no broken glass, nor a hurt person, to make matters worst that imaginary dead that came to the minds of those who planned tremendous and false accusation.”

Lasso indicated that these statements would be “scapegoats” to distract the attention from the discussion on the indefinite reelection. “It’s been three weeks and they have not given us the forms,” he said.