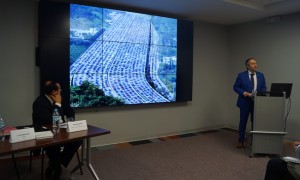 Exhibitors talked about the origins, consequences, and data of traffic accidents.

Latin America recorded about 120 000 deaths and 6 million injured each year in traffic accidents. This was announced by the president of the Spanish Foundation for Traffic Safety (Fesvial), Luis Montoro.

The Fesvial President stressed that this is a “serious problem” the region faces. He added that these figures, which are given by summing the deaths in cities and urban roads tripled European records, where every year approximately 27.000 people die.

He added that half of the traffic accidents where there are injured people occur in the cities of the region, where the death toll is 35.000 per year, which is three times the figure in Europe, although the number of cars in proportion to the population is three times lower than the European rate.

The II Iberoamerican Conference on Municipal Road Safety, was organized by the Spanish Foundation for Traffic Safety (Fesvial) and the consulting and technology multinational (Indra), in order to publicize good practice in this aspect, carried out in different countries of the region to reduce the rate of traffic accidents victims.

The conference brought together experts from Spain, Peru, Colombia, Mexico, Uruguay and Venezuela, among other countries of the region, and included the participation of entities such as CAF (Development Bank of Latin America), CICEFOV (Latin American Confederation of Centers for Education and Training in Road Safety), the Road Crusade Association and municipalities as Bogotá (Colombia), Lima and Carabayllo.