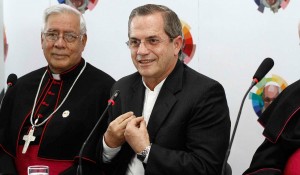 Today lay groups will conduct a sit-in at 16:00 in support of Monsignor Antonio Arregui, Archbishop of Guayaquil, by the criticism he received from the legal secretary of the Presidency, Alexis Mera, last week.

This, despite the announcement made last Tuesday by Foreign Minister Ricardo Patiño (on leave) and the president of the Ecuadorian Episcopal Conference (CEE), Monsignor Fausto Trávez, concerning “peace agreement” signed by the government and the Church.

Organizers convened the Catholic community to meet at the seat of the (EEC) in Quito, in order to demand Mera to apologize with Arregui.

The official called the archbishop “insolent messenger of the right,” for  giving his opinion about the call for dialogue driven by the Executive  branch. To overcome this event, Patino invited Travez to a meeting at the Chancellery.

“It was not convenient for the government or the church to be in these circumstances, and it was a mutual agreement to recognize that, both parties, should apologize; and we did so openly, but with the dialogue we had everything remained in peace and we said that, it’s over, let’s finish this, and God grant that this circumstance never happens again … It was unwise to have qualified Archbishop Arreguilike that,” said Travez yesterday.

He also clarified that Patino “did not use the word `sorry,’ but `neither the president nor I agree with Mera.'”

Jaime Nebot spoke about the economic crisis of Ecuador

Bishops insist on dialogue and respect