Leaders, political characters and teachers, in the seven panels 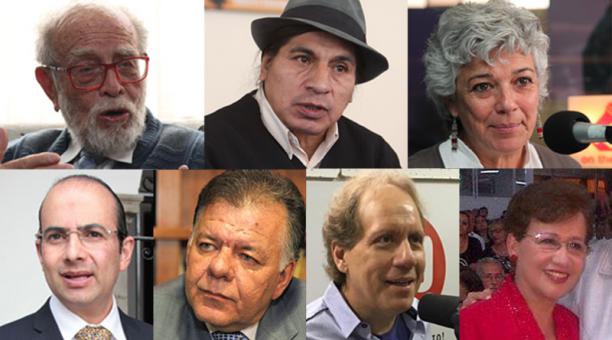 Among the 21 candidates of the Executive to occupy the Council of Citizen Participation (Cpccs) of Transition, 12 have worked in public institutions. In some cases because they were appointed by an authority and, in others, because they won elections.

For example, Julio César Trujillo was a candidate for the Presidency and a deputy; Marcelo Merlo was Minister of Government and Comptroller General; Manuela Gallegos was secretary of the Peoples and part of the founders of Alianza País; Luis Macas was Minister of Agriculture and Deputy. In the list there are also those who have had partisan political connections, most of them with groups called the left, such as Pachakutik, the Socialist Party, the Alianza País movement or the defunct Popular Democracy.

For example, Hoover Delgado is currently an Andean parliamentarian for AP. He finished second as Mireya Cárdenas and is linked to the transport sector that supported former President Rafael Correa. Luis Macas is a historical indigenous leader, linked to Pachakutik and the Conaie; Santos Villamar comes from the bases of the National Confederation of Peasant, Indigenous and Black Organizations (Fenocin), which he now chairs. Marlene Montesinos is a representative of the migrant community in the United States. She lives in New Jersey, is a lawyer and is linked to human rights organizations. In 2009, she was a candidate for the Assembly for a movement of migrants called New Republic.

There are also adherents of the ruling party in the seven shortlists: Jacinta Preciado, Magdalena Chávez and Katuiska Chávez. Preciado was part of the group of professionals who formed the United Front, akin to the previous government.

Chávez was a candidate in Imbabura for the parish council and rural councilor, both for Pachakutik and the late MPD. However, there are names like those of Pablo Dávila, Xavier Zavala and Lucía Calderón who have no known political connections. But in this Government they have been summoned by the same President Lenin Moreno so that the first two form part of the Front for Transparency and that the last one integrates the Tax Advisory Council.

Likewise, three other candidates of the Executive belong to the current National Anticorruption Commission (CNA), such as Julio César Trujillo, Marcelo Merlo and María de Lourdes Arboleda. This body was created by the Popular Front to investigate the corruption of the previous Government. The majority are men (12) and Pichincha (9). Only three are under 40 and 11 have between 62 and 87. A fortnight have third level degrees, registrations in the National Secretariat of Higher Education (Senescyt) and nine others have master’s degrees.

Although their professions are varied, there is an engineer, a doctor, a specialist in Chinese philosophy, a cabinetmaker, a soldier and even a priest, most are lawyers and many have also devoted time to university teaching. Three have been linked to international organizations such as María Arboleda in UN Women, Magadalena Chávez in Unicef and Mariana Alcívar in SOS Villages.

Of the 21 names referred to the National Assembly by Moreno, five were on the eight lists submitted by civil society: Julio César Trujillo, Mariana Alcívar, María Arboleda, Manuela Gallegos and Luis Macas.

Finally, according to the Citizenship and Development Foundation, 11 of the candidates hold shares in private companies, two occupy management positions and five, of presidents. (I)