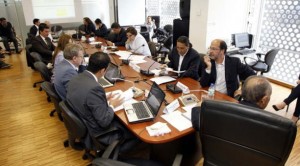 The Committee on Economic Regime of the Assembly adopted the report of the Executive veto to the Monetary Code. The text suggests that the Assembly fully be subject to 52 of the 56 proposed changes, partially accept two and insist on two articles.

The Commission suggests the Assembly insist on the Regulatory Board to be the one that issues the standard for appointing members of the Advisory Council. The Executive and its veto proposed for the Council to be chosen through a competition held by the Council of Citizen Participation and Social Control (CPCCS for its Spanish acronym).

The Commission stresses that the integration of this Council should be flexible and that the selection by the CPCCS “would end up designating the permanent representatives and for a given period”.

The Commission also objects in the article that it refers to savings banks. The Assembly considers that these entities may obtain legal status. The Executive argued that this was not necessary and they only had to be registered.

Furthermore, it is suggested not to accept the proposal of the Executive to establish mechanisms for insurers that are currently in liquidation, to complete this process. The Commission relies on the claim that the law is not retroactive.

The Commission has already sent the text to the Secretariat of the Assembly to make it reach the Plenary. Virgilio Hernandez, a member of the Committee and Assemblyman of AP, said he expects to approve the code next week.