Lenin Moreno exposed the scope of his policy at the UN 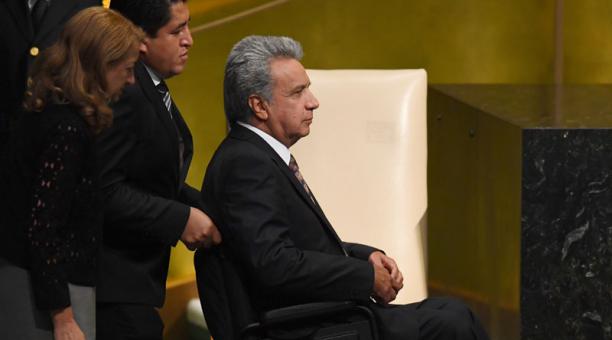 President Lenin Moreno arrived yesterday, September 20, 2017, to the 72nd Assembly of the United Nations. His debut as President in this international body lasted only 16 minutes.

The organization of this Assembly had to adapt the podium from where Moreno spoke. And from that podium, he introduced Ecuador as a country that cares for people with disabilities. Moreno expressed his gratitude for the arrangements they made so that he could address the other presidents of the world, in the UN chamber. In a world with “one billion disabled people,” the President was “optimistic: we have all the capacity to find solutions. It is a matter of political decision.”

Moreno welcomed the coincidence of his government’s philosophy with the theme of this UN conference, which is “focused on people, for peace and a decent life for all, for a sustainable planet, where we build peace every day.” That is why he briefly outlined the emblematic policy of his management: the Toda Una Vida plan, for homeless people. (I)