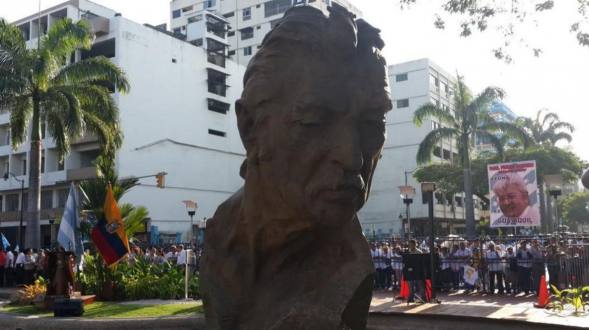 The people of Guayaquil were present at the unveiling of the bust in honor of the Former President of Ecuador and Guayaquil Former Mayor LeónFebres Cordero, on the Malecón Simón Bolivar. The work, by the Spanish artist Victor Ochoa, remained until 17:00 on Wednesday, August 27, covered with a white canvas.

The speech was led by Mayor Jaime Nebot, who said: “today we deliver to Guayaquil the León Febres Cordero walk, which borders to the south withthis monument and to the north with the obelisk that the people placed near Las Peñas, showing that nothing and nobody could prevent citizens and the City Hall to be respected”, explained referring to those who did not allow in 2011 to set this bust.

In addition, there were the interventions of Blasco Peñaherrera Padilla, the Former Vice President in the goverment of Febres Cordero, in the period 1984-1988; and María Eugenia Febres Cordero, his daughter.

Both stressed the virtues and the job that the deceased leader of the Social Christian Party, in December 2008, both in his capacity as Head of State, as in the reconstruction of Guayaquil, that is attributed to him.

In his speech, Nebot said that Febres Cordero had errors, “as anyone who dares to take decisions and build, but in the balance of his life his successes were undoubtedly much higher.”