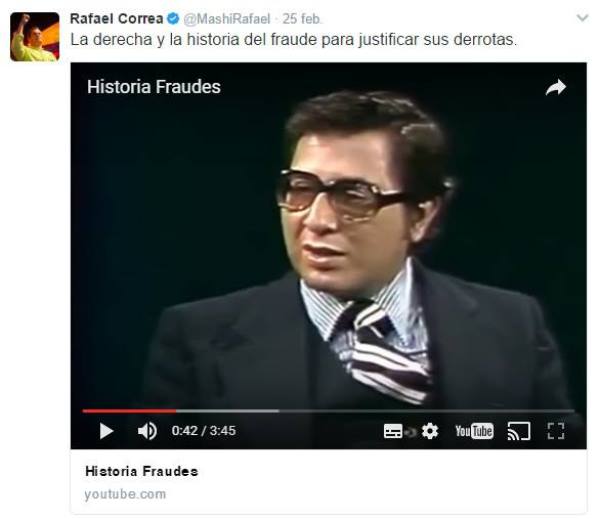 During the last weekly address, President Rafael Correa used the image of Jaime Roldós Aguilera, president of Ecuador from 1979 to 1981, for a space he called “The History of Frauds in Ecuador.”
In that space, Correa said that the right has always used the “old history of fraud to try to mitigate their defeats (…) and to see if they have more chances in the second round. They did it with Roldós; they did it with (Rodrigo) Borja. They have done so in several other elections, and now they have tried to do it with the citizen revolution.”

Leon Roldós Aguilera, Ecuador’s former Vice-president from 1981 to 1984, and brother of Jaime Roldós, indicated through a letter that he was acquainted with the content of the weekly address, in which quotes and pictures of his brother of 1978 were presented by Correa out of context “to give the current National Electoral Council the status of a victim.”

Roldós said that there is a difference between his brother and the current president. “He (Jaime Roldós) was confronted with the dictatorship that prevailed, and you (Rafael Correa) personalize the authoritarianism of power with a National Electoral Council that obscenely obeys you,” he said.
The also former presidential candidate added that his niece Martha Roldós informed him that this “fraud” (the video with images of Jaime Roldos) had been released on Twitter. He said that the former legislator had warned Correa that the video of the late president had been cut and manipulated, but the current president has used the “fraudulent material” once again.