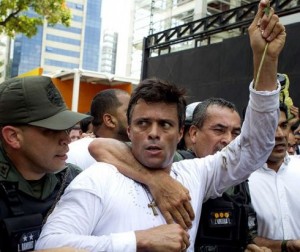 The trial against radical opposition leader Leopoldo López, accused of calling for violence in the protests that from February to May hit Venezuela with a toll of 43 dead, was resumed on Tuesday.

At the fifth hearing, which started almost two hours late and counted with the observation of an American diplomat, the testimony of two officers of the Attorney were collected.

According to the Twitter account of Lopez, they stated that “there was no fire at the headquarters of the Public Ministry” after the demonstration of February 12.

The opposition leader summoned for a demonstration on February 12 under the theme “The Way Out” to demand the resignation of President Nicolas Maduro, where three men died from gunshot wounds.

The prosecution accuses Lopez as “determiner in crimes of arson and damage, public incitement and conspiracy,” which according to Venezuelan law, is punishable by up to 10 years in prison.