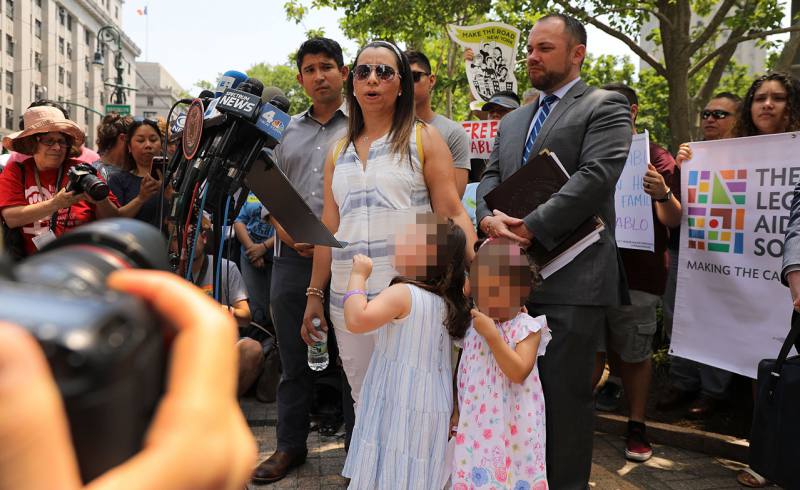 The family and lawyers of an Ecuadorian pizza delivery man, who was arrested while delivering a pizza to a New York military base, yesterday presented a formal request to the immigration authorities for the immigrant to be released immediately.

The lawyers of Pablo Villavicencio (35 years old), along with his wife, Sandra Chica – an American citizen – and two young daughters, said at a press conference that they made the request. In it they assure that he does not represent any danger for the security of the country and his absence causes serious emotional and financial damage to his family.

Jennifer Williams, of the Legal Aid Society, also said that her client’s detention is unjustified until the circumstances surrounding her arrest become clear.

The Ecuadorian was arrested on June 1 while delivering pizza at the Fort Hamilton military base in Brooklyn. A background check at the entrance revealed that an arrest warrant was issued by the immigration authorities.

A federal judge has temporarily blocked his deportation, but the immigrant remains in custody of the Immigration and Customs Enforcement Services in New Jersey until his case goes to court.

According to the immigrant’s lawyers, Villavicencio crossed the border illegally in 2008. Two years later he requested asylum, but a judge ordered him to leave the country before July of that year. The Ecuadorian did not do so and therefore an arrest warrant was issued against him, officials of the immigration agency have indicated.

In 2013, Villavicencio married Chica and in February of this year he applied for permanent residency. He was waiting for that process to advance when he was arrested at the military base. (I)