BREAKING NEWS
Contentious Electoral Court will review the primaries conducted by Social Justice for the general elections
Open call for Ecuadorian teachers interested in working in schools in the United States
Movement that supports Álvaro Noboa denounces 4 CNE councilors
Justicia Social denounces four councilors of the National Electoral Council for alleged contempt
The United States and Ecuador will sign on December 7, in Quito, the first phase agreement
Patricio Pazmiño is Minister of Government after the dismissal of María Paula Romo
Álvaro Noboa supporters announce legal actions to register his candidacy
A judicial complaint and protests against the CNE councilors announce supporters of Álvaro Noboa so that his candidacy is registered
Justicia Social announces legal battle to register Álvaro Noboa
Sylka Sánchez announces lawsuit against CNE advisers

Liga de Loja lost in Argentina and was eliminated 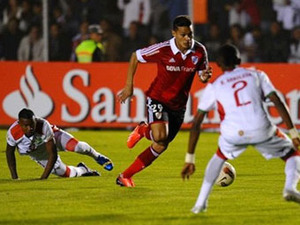 With a final score of 0-2 against River Plate, the Ecuadorian team did not pass the quarter-finals of the South American Soccer Cup. However the team demonstrated the best game as the national representative in international tournaments this year.

Liga de Loja, following the strategy of technical director Alex Aguinaga, fought back with order, but the constant attacks of Argentines paid off before the end of the first half they scored a goal thanks to the Colombian player Gutierrez and half of the second when, in an individual move, Lanzini added another point.

The team of Loja managed to score in the last minute when Wila lost it in the area after a thorough attack, which would have tied the series, as they won 2-1 in the first match, and would have defined it with penalty shots.