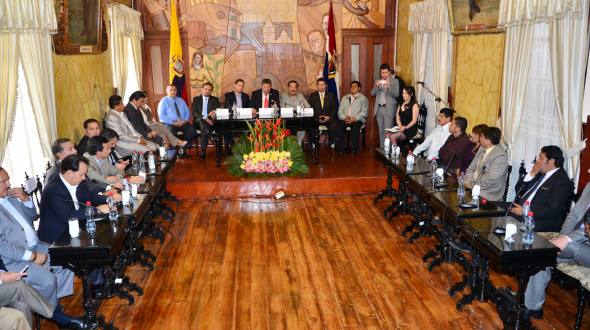 22 country regional officials met on September 10 in Guaranda to formalize their agreements regarding the draft Land Use Law. The managers of the meeting were the Mayors of Guaranda, Ramsés Torres; Guayaquil, Jaime Nebot, and Quito, Mauricio Rodas.

The meeting included representatives from the Coast, Sierra and the Amazon region, and different political trends, but none of them were of the ruling Alianza PAIS (AP).

They discussed twelve points, among which are: the ‘discomfort’ by the reform to the added value tax, the rejection to the draft Law on Land Use, a call for the autonomy of local governments are not violated and “the warning that they will act in defense of the economy of citizens (in reference to a possible rise in urban transport fares). “

Organic Monetary and Financial Code is in force