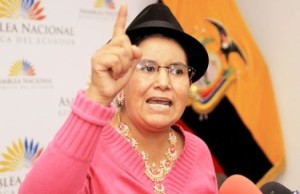 The legislator of the Pachakutik party, Lourdes Tiban, reported yesterday to the Judicial Police the robbery of her home in the capital.

He said that last Sunday was with her family in Pujili (Cotopaxi), and in her absence thieves entered her house. She believes that the theft was aimed to search information, as three computers were stolen: one of them was personal and two of her children, in addition to an external hard drive.

In that had drive, she said, she had information about her aggression three months ago near the office.

And precisely expressed regret that there are no results of the investigation on the previous event and the fact that the robbery happened a few hours before receiving (last week) the notification of the criminal complaint of María Jose Carrion (AP), who -she said- is requesting half a million dollars for the alleged affectation of her good name, imprisonment and her destitution.

“My family, my home, do not have to be confused with my political activity,” she said.