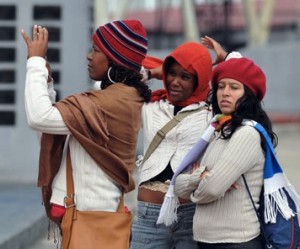 Cold winds affecting the Northern Hemisphere traveled to the south side of United States, ice warnings were issued in Florida, where many schools suspended or delayed classes. In Washington D.C. heavy snowfalls have also caused that many schools choose to close their doors.

In New York, snow on the asphalts caused two quite busy ways to be closed near Rochester.
In Canada, authorities have rescued all the people who got trapped on Monday night on a highway west of Toronto due to a severe snowstorm and strong winds.

The Ontario Safety Minister, Jim Bradley, said rescuers have pulled 237 people out of the 40 km stretch of Highway 402, in an area located about 300 km from Toronto.

At first it was estimated that about 300 people were trapped in the area—since there were about 360 vehicles—. Police said all vehicles in the highway are being registered to ensure no one is trapped.

Snowfalls in Germany and the ice sheets that formed in its tracks yesterday made many roads and highways get cut and up to 60 flights at the airport of Munich (south) get suspended. The airport reported that before 12:00, the emergency services were forced to clean the launching and landing tracks eight times.
Source: El Universo