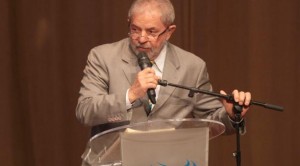 Luiz Inacio Lula da Silva, former president of Brazil, gave a lecture yesterday at the Civic Center in Guayaquil, in framework of the seminar of the Union of South American Nations (Unasur for its Spanish acronym).

During his presentation, Lula made a remembrance of the birth of the UNASUR at the beginning of the last decade. “We used to meet with Hugo Chavez several times a year, with Argentina, Ecuador …” he said.

He also called for the integration which, as he said, should include bureaucratic issues, because the cooperation agreements between two or more nations are often not realized due to the lack of approval in the Legislature of either country.

It is expected that the event of UNASUR continues tomorrow, with the delivery of the Pro Tempore Presidency of the organism to Uruguay, for which President Jose Mujica will be present.

Surinam handed the pro tempore presidency of UNASUR to Uruguay