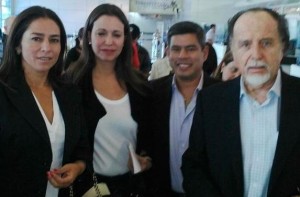 Maria Corina Machado is already back to Venezuela and people who wanted to show their support, went to her arrival.

In early hours of this Wednesday, Parliamentarians Belaunde Martin, Luis Galarreta and Cecilia Chacon joined Machado in the flight that took her back to the country.

Upon her arrival, the Venezuelan opponent told reporters she feels “more a congresswoman than ever.” This, after the Parliament President Diosdado Cabello, announced that she is no longer Parliamentary after being named Alternate Ambassador for Panama to participate in the last Friday session of the Organization of American States (OAS.)

The opposition Deputy described as “null and unconstitutional” the actions taken against her by President of the National Assembly.

“It’s an atrocity which has been committed,  Mr. Cabello with his statements, that are absolutely null and unconstitutional,” said Machado at the airport.

Patiño rejects the request of the IACHR in Jimenez case