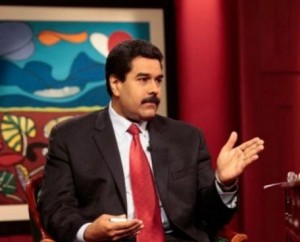 In an opinion article that publishes this tuesday the U.S. daily The New York Times, entitled “Venezuela: A call for peace,” President Nicolas Maduro calls for peace and at the same time laments the coverage that “many foreign media” have made about the recent protests in the country.

“Claims that Venezuela has a poor democracy and that the current protests represent the sentiment of the majority, contradict the facts,” he says. “They have distorted the reality of my country and the facts that have surrounded these events.”

According to Maduro, anti-government protests that broke out in February are being organized by “the richest sector of society that seeks to reverse the gains of the democratic process.”

He also states in his article that in the U.S. “protesters have been described as peaceful, while it has been said that the Venezuelan government is repressing them with violence.”

“Venezuela needs peace and dialogue to advance. We positively received anyone who sincerely want to help us achieve these goals,” Maduro concluded.

Venezuela will receive a commission of foreign ministers of UNASUR