Maduro government is criticized by Catholic Church of Venezuela 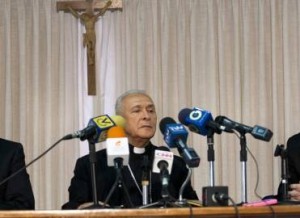 The Venezuelan Episcopal Conference revealed a 12-point statement wherein condemns the Government of Nicolas Maduro for the way it has handled the political crisis since February, which remains in suspense to Venezuela.

The bishops argue that the current crisis is a result of the chavism intention to impose the “Plan Patria” as a mandatory law. A plan that according to them: “hides the promotion of a totalitarian Government, questioning its democratic profile.”

They justify their reasoning as a result of restrictions on information and opinions freedom, the lack of public policies to address the legal insecurity and “the brutal repression of political dissent and the attempt of pacification or appeasement through the threat , verbal violence and physical repression. ”

“We reiterate our strong requirement that the government disarm the armed civilian groups. Their coordinated action, following to certain patterns, shows that it is not about isolated or spontaneous groups, but rather trained groups to act violently. “