Maduro proposes to increase the price of gas to combat crises 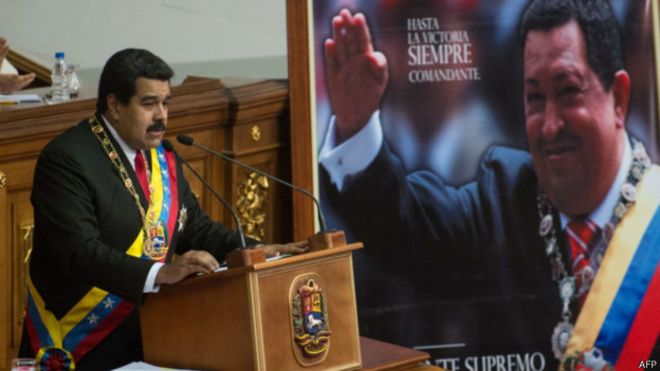 Venezuela’s President Nicolas Maduro proposed to increase the price of gasoline, which is the cheapest in the world and consumes a millionaire subsidy before the “serious economic difficulties” the country is facing by the fall in the price of oil barrel.

During his speech before the Parliament to deliver his management report in 2014 and announce measures to combat economic crisis, Maduro warned that for a time oil prices “will not return” to the USD 100 of recent years, so the country must be prepared to tackle economic problems.

Among the measures is included a simplification of the official exchange rates of the exchange control, of 12 years in force, which envisages the creation of a market with private participation, plus a minimum wage increase of 15% from February.

He also announced that the official exchange rate of the dollar to 6.3 bolivars will be kept “to protect the economy and society” in Venezuela, while only one Complementary Currency Management System (SICAD) will be kept, instead of the current two.

Regarding the long lines of shoppers of consumer goods in supermarkets, he assured that the “mafias” of private networks of food distribution “hide” products to irritate the people and generate a destabilization to overthrow him.