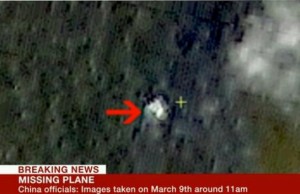 The authorities of Malaysia reported the sending of an aircraft fleet to check the alleged wreckage of the missing plane after the Chinese Government published in an official website three images of `floating objects´ captured by one of its satellites.

The images were taken last Sunday, March 9 about 11 o’clock in the morning, but have not been revealed until this Thursday by the Administration of Science, Technology and Industry for national defense.

The Flight MH370 took off from Kuala Lumpur tat 00: 41 local time last Saturday, and was scheduled to reach Beijing at 06:30. The Boeing 777-200 carried fuel for 7.5 hours of flight and was carrying 227 passengers, including seven children, and a crew of 12 people.