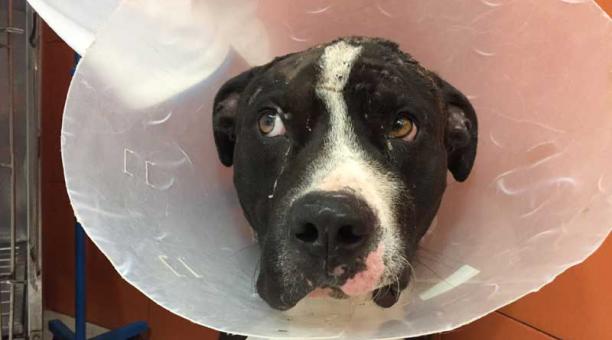 The pitbull that was attacked with a machete in the north of Quito continues in recovery. Cristina Calderón, of the Camino a Casa Foundation, informed this Diary that last Monday, June 12, a formal complaint was filed in the Court of Contraventions against the dog´s alleged aggressor.

In Ecuador’s legal system, animal mistreatment is considered a contravention. Article 249 of the Integrated Code of Criminal Procedure (COIP) states that “a person who, by action or omission causes harm, causes injury, deterioration of the physical integrity of a pet, shall be punished by a penalty of fifty to one hundred hours of community service”. If the attack had resulted in Bruno’s death, the offender had been sentenced to spend from three to seven days in jail.

For lawyer Inti Alvarado Romero, master in Animal Law, these sanctions do not generate precedents in the judicial issue and do not create awareness in the population about these acts. “Since these are ridiculous penalties, they really do not have any impact on the society they’re supposed to regulate,” she says.

She believes that the current sanctions are not aimed at protecting the rights of nature or animals, “but a kind of coexistence in a human environment, where animals cohabit and that makes necessary relations of coexistence between species,” clarifies Alvarado, who is also a trustee for Animal Rescue Ecuador. (I)

The exports with incorporation of technology are still an anecdote