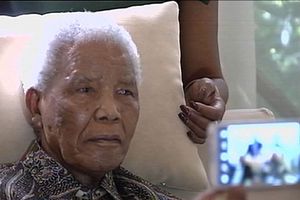 Winnie Madikizela-Mandela, ex-wife of Nelson Mandela, said that he is still “very sick” and cannot speak due to the tubes  that keep his lungs clean of fluid, although he is relaxed.

“He remains very sensitive to any germ, so he literally has to be in a sterile environment. His room (at his suburban Johannesburg House) is like an intensive care unit ” said Madikizela-Mandela in an interview in the Sunday Independent newspaper.

The ex-wife of Mandela denied information that the former President and winner of the Nobel Peace Prize is under artificial respiration, and added that specialists have told relatives that he can recover his voice.

Mandela is at his home in Johannesburg, where he receives intensive care since he was discharged from the hospital the first of September, after nearly three months interned by a persistent lung infection.

Nelson Mandela served a term of five years as President of South Africa, and then he devoted himself to charity work, including the fight against HIV/AIDS, years later he withdrew from public life.

Former President made his last public appearance in the 2010 World Cup, held in South Africa. Although he welcomed the audience in the stadium.