Marches in Brazil ask for the decriminalization of abortion 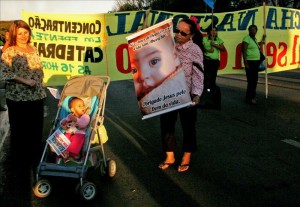 In Sao Paulo and Rio de Janeiro hundreds of people marched yesterday in favor of the decriminalization of abortion in Brazil. They criticize the large number of women who die in the country after undergoing abortions in clandestine clinics.

“Our goal is that abortion is legal, safe and free. To fight for the legalization of abortion is to fight for women’s health,” was the message sent by groups who called the march in social networks.

“Women are dying every day, mainly poor women because the rich have access to safer clinics. We want the decriminalization of abortion because women have the right of not being mothers,” said Isabella Medeiros, one of the organizers of the march and representative of the Feminist Collective organization.

Analu Faria, representative of the World March of Women, said that there is a lack of interest of the Government and the parties in relation to abortion. She also criticized the initiatives of Gospel legislators to stop any kind of debate on abortion in the Congress.