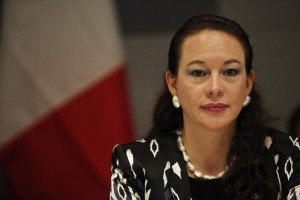 The former Minister of Defence, María Fernanda Espinosa, will be the country’s permanent representative to the headquarters of the United Nations (UN) in Geneva, Switzerland, yesterday said the Foreign Minister Ricardo Patiño.

Luis Gallegos abandoned that diplomatic representativeness in June of 2014 and so far a new representative had not being appointed.

“In the coming days we will study the last details for our dear companion to travel to Geneva,” said the chancellor.

Patiño also announced that from 10 to 15 new diplomatic appointments overseas have been studied, which will be announced in the coming days. He also anticipated that new embassies will be opened in Africa.