Facilitating that Ecuadorians residing abroad can go to the polls amid sanitary restrictions due to the pandemic, the non-printing of ballots to elect Andean parliamentarians and adjusting the operation of the Computerized System of Scrutiny and Results (SIER) are the activities that the National Electoral Council (CNE) must resolve in the final stretch of the organization of the electoral day that will take place this Sunday, February 7. 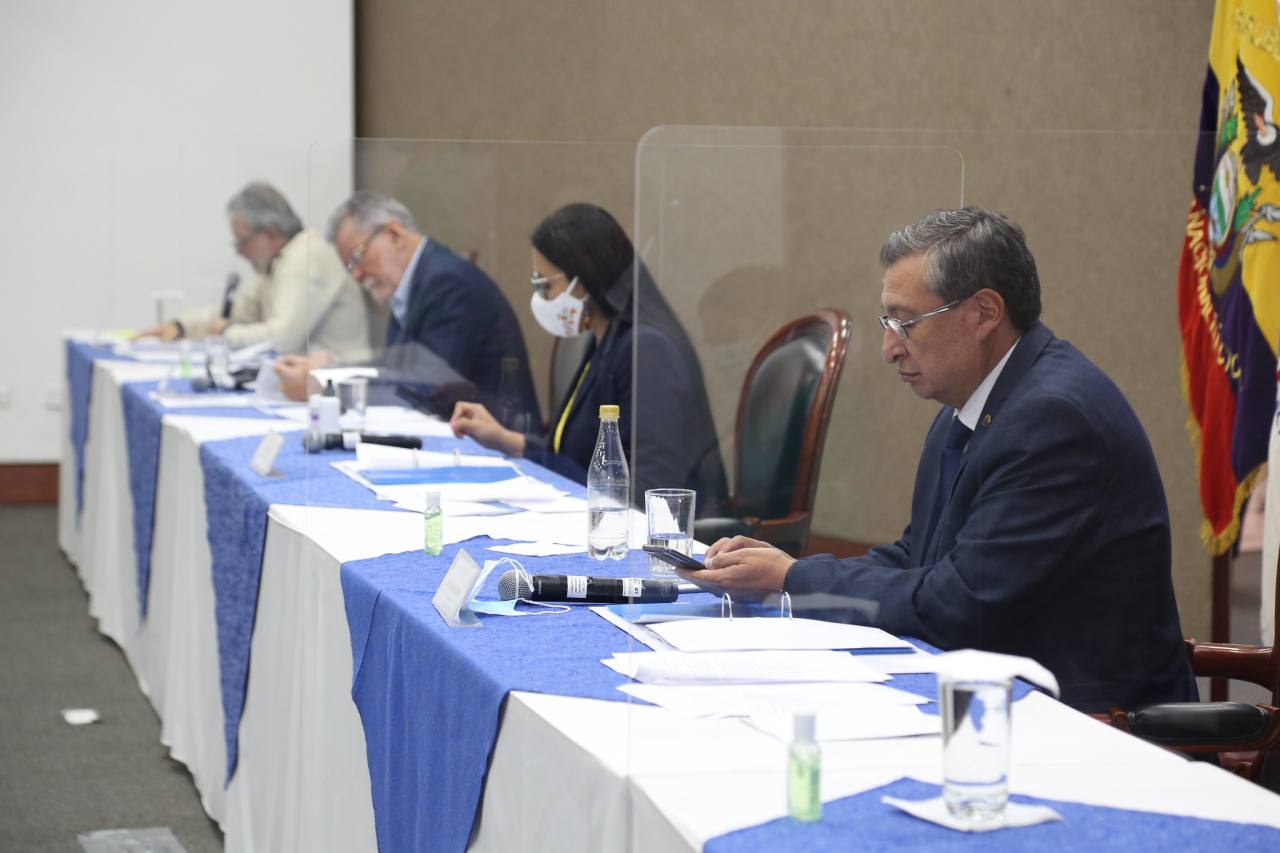 On March 12, 2020, the Council declared itself in an electoral period, and in the last eleven months of organizing the elections, the work of the five councilors has been marked by internal political, budgetary, and logistical setbacks, to which the pandemic was added.

They managed to correct these factors due to the situation in which they are immersed: the internal division.

The counselor José Cabrera acknowledged that the five discussed the national situation, the importance of institutions and democratic stability.

The litigation that the Social Justice political movement maintains against its decisions had been one of the mitigating factors.

Following a ruling by the Contentious Electoral Tribunal (TCE) in favor of the movement, which forced the Council to implement comprehensive reparation measures so that they can register candidates outside the deadline set in the calendar, pressured them to take a position to avoid delays in the electoral process.

In this case, the four councilors even face a possible dismissal from their positions, in the process of a complaint of electoral violation filed by Social Justice, which was processed by Judge Ángel Torres.

The plenary session of the judges has yet to be pronounced, which will be a final decision. Counselor Esthela Acero, who has abstained in the approval of the resolutions, escaped this.

Since they were inaugurated in 2019, at one end were Diana Atamaint, Esthela Acero and José Cabrera, and at the other, Luis Verdesoto and Enrique Pita.

But in recent months, Pita, Verdesoto, Cabrera, Atamaint meet previously and reach agreements, before submitting them to the approval of the plenary session.

Unofficially it is known that these dialogues have given ‘fluidity’ in the making of resolutions.

According to Cabrera, the agreement was “to give peace to the country and put aside conflicts, personal issues and start working together.”

Despite this, six days after the 13’099. 150 registered voters go to the polls to elect the presidential and assembly members, they were presented with new problems.

Although voting is not mandatory for Ecuadorians living abroad, the Ecuadorian Embassy in Panama warned that the Government of that country did not authorize the electoral event to take place, because there is a total quarantine on Sunday.

These sanitary measures to prevent COVID-19 infections are also observed in Peru, Venezuela, Nicaragua, where there are about 12,600 voters, but so far, the CNE has not decided what it will do to guarantee the day.

There have been meetings between the councilors and Chancellor Luis Gallegos, whose resolutions are unknown.

Meanwhile, the TCE denied last Friday a contentious appeal promoted by Social Justice to order the Council to give it more than one day to register its candidates for the Andean Parliament .

The CNE gave him a day to do it, but the political group asks for more. The ECA closed the matter and closed the case.

The processing of these challenges prevented the Military Geographical Institute (IGM) from printing the ballots in time to elect this dignity; and even the Defense Minister, Oswaldo Jarrín, announced that the IGM would no longer be able to do so.

But the president of the CNE reported that yesterday that the IGM began printing the ballots for Andean parliamentarians, which would be distributed in the coming days. In his Twitter message he guaranteed the election of this dignity next Sunday.

Another activity that focuses the attention of the directors is that the scrutiny system for the disclosure of results does not experience technical failures, such as those seen in the 2019 sectional elections, when there was a ‘blackout’ between 7:30 p.m. March 24 (Election Day), until almost mid-afternoon on March 25.

This failure was called ‘the blackout’, although Atamaint has denied it.

For these elections, the computer system that will be used was not subject to renovations due to delays in the allocation of the budget due to the economic crisis, which prevented contracting for the acquisition of servers, for example.

Although, after the two national drills, on January 17 and 24, it would have worked “successfully,” say the members.

According to Cabrera, the drill yielded “successful” results, while the counselor Verdesoto said that “they have done well.”

It endured ‘stress loads’, tests of computer attacks, and in general “with the equipment that we have, it is going well so far,” said Verdesoto.

The reports of the technical departments on this activity are kept confidential.

Conflicts in an election year

A preliminary audit by the Comptroller’s Office warned the CNE in August 2019 that Justicia Social, Podemos, Compromiso Social and Libertad es Pueblo should lose their legal status due to anomalies in the registration signatures. Diana Atamaint, José Cabrera and Esthela Acero resolved to eliminate them one day before the call for elections, due to the threat of dismissal by not complying with the recommendations of the control body.

Fracture in the Electoral Function

Between October and November, the TCE ratifies the legal status of three movements, and extinguishes Libertad es Pueblo. Social Justice is absorbed by the politician Álvaro Noboa, who was looking for a movement to launch his presidential candidacy. The CNE does not allow the registration of new candidates, only those entered in internal democracy. The TCE orders reparation measures to allow them to register candidates. The Electoral Function was fractured.

The judges of the TCE sent the file to the Prosecutor’s Office so that counselors Enrique Pita, Diana Atamaint, José Cabrera and Luis Verdesoto could be investigated for the alleged crime of failing to comply with orders from the competent authority, because they consider that full reparation was not complied with.

The definition of the electoral budget had been discussed since February 2020. Diana Atamaint projected an amount of $ 170 million, which the Government criticized. He lowered it to $ 145 million, to $ 123 million, to $ 114 million. Nine months later, the Ministry of Finance approved $ 91 million for him. Atamaint said that at the moment they require $ 8 million to pay suppliers, the Police and the Armed Forces, but there is no money.

The loss of personnel due to lack of budget also affected the CNE. In October 2019, 570 workers were laid off, and in August 2020 an optimization of $ 1,538,191 was planned in the elimination of positions. José Cabrera is one of the members who complains about the lack of experienced personnel, which the CNE had.

The error in the printing of ballots

The IGM had 6,244,000 printed presidential ballots and on January 13 it was discovered that there was an error in the logo of the Amigo movement. Ballots had to be reprinted with a new badge, and it is unknown when the CNE will destroy that electoral material. The mistake cost an additional contract for more than $ 400,000. (I)