Markets fall after the re-election of Rousseff in Brazil 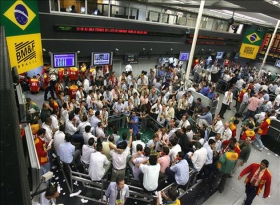 The re-election of Brazilian President Dilma Rousseff collapsed on Monday, October 27 the stock exchange and the real (Brazilian currency),revealing the challenges she faces to unite the country and revive the stagnant economy.

The markets, that preferred the defeated presidential Aécio Neves and have shown “allergy” to Rousseff in recent times, collapsed on the first working day after the elections.

“It is expected that the market reacts with losses on Monday, the president has to announce this week who will be her Finance Minister,” told to AFP the chief of Gradual Investimentos, André Perfeito.