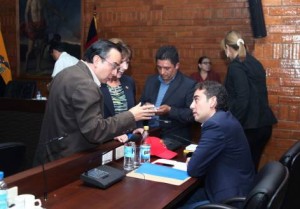 Mauricio Rodas, Mayor of Quito, suffered his first political setback yesterday when in the plenary sesion the Alianza País (AP) block attempted to form the 21 committees of the council with the vote of its ally Antonio Ricaurte of the SUMA-VIVE alliance.

The meeting aimed to release the report on the conformation of the 21 committees that will work with the Municipality of Quito. The session was chaired by Councilman Sergio Garnica (SUMA-VIVE), due to the absence of agreements between councilors and AP-VIVE SUMA, the Commission Board chaired by Rodas had to put together the proposal.

But a proposal by Councilman Mario Guayasamín (AP) with the distributional commission that had the support of Ricaurte, alerted Rodas, who closed the session and that intention was not executed.

After the close of the meeting, Deputy Mayor Daniel Chacón (SUMA-VIVE) spoke of a possible ‘betrayal’ concerning the position Councilman Ricuarte took, who improvised a press conference with counselors of the AP block to clarify their actions.

Ricaurte said his position was in line with the democratic defense, and it was expected to file a motion for the integration of the commissions, which according to his criteria had to be respected by the “policy proportionality existing.”