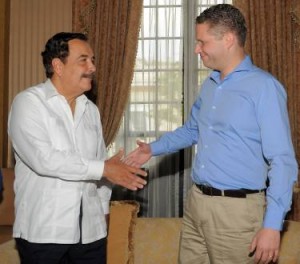 For the first time in many years, a Mayor of Quito will attend the solemn session organized by the Municipality of Guayaquil for the 479 years of foundation of the city.

Mauricio Rodas, Mayor of the capital city, confirmed to Daily EXPRESS, that he will be present today at the ceremony chaired by Mayor Jaime Nebot, at the Integration Plaza of Malecon Simon Bolivar.

A spokeswoman of the Mayorship of Guayaquil said that, as every year, invitations have been sent to the national authorities, including the President of the Republic Rafael Correa, as well as Mayors and  Prefects of the country.

In addition, Rodas will leverage his visit to meet with members of the SUMA party .