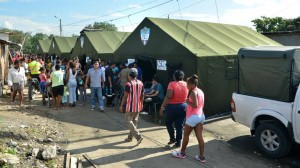 The Municipality will not withdraw the tents of social assistance until the government carries out its housing plan for the evicted families. (Source: El Universo)

“We have installed the tents on the street. The street is public, it is our competence to provide that assistance. By no means the tents are on the ground that has been evicted,” were the words of Jaime Nebot, Mayor of Guayaquil, concerning the order of the government to remove the tents from the area where 40 families have been forcibly evicted.

Governor of Guayas Rolando Panchana asked the mayor to remove the tents placed in the Melida Toral cooperative at the Trinitaria Island, which host the evicted families. Nebot said he will not withdraw the tents from this sector until the government carries out its housing plan, otherwise, until a CAMI (Municipal Center for Integral Care for its Spanish acronym) is ready.

On the statements of governor Panchana, who warns that the mayor promotes illegal settlements, Nebot said: “I do not read comics. Unfortunately I have no time. I love it but I have no time.”

Homes for evicted people from the Trinitarian Island but financed