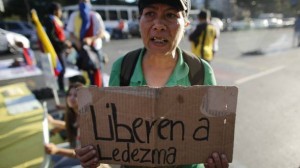 The Venezuelan prosecutor yesterday ordered the provisional detention for the mayor of Caracas, Antonio Ledezma, who was arrested on Thursday by the intelligence services for an alleged crime of conspiracy.

“The Public Ministry achieved the custodial sentence for the mayor of Caracas, Antonio Ledezma Diaz, who was arrested (…) for alleged links with conspiratorial plans,” said the prosecutor, who also said he will be detained in the Ramo Verde prison, on the outskirts of Caracas, where opposition leader Leopoldo Lopez has been detained since February 2014.

“At the presentation hearing, the 20th national prosecutors and assistant and 16th of the Metropolitan Area of Caracas, Katherine Harington, Yeison Moreno and José Orta, respectively, accused the mayor for allegedly engaging in crimes of conspiracy and association,” said the Public Ministry.