Mayor of Iguala and his wife are arrested in Mexico 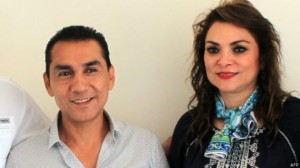 The Mayor of the city of Iguala, Jose Luis Abarca, and his wife were arrested in Iztapalapa, in an operation by the Federal Police of Mexico, said Jose Ramon Salinas, a Spokesman of the institution through his Twitter account.

Abarca and his wife, María de los Angeles Pineda, were arrested in a house in Iztapalapa, which apparently they rented and whose owner would have alerted the police of their presence, the source said.

According to El Universal, the capture was made possible thanks to an operative developed by an elite group of the Federal Police.

Those arrested were charged for the disappearance of 43 students and for killing six people in Ayotzinapa, which occurred last September.

Pacific Alliance and Mercosur talk about a possible integration