Mayor Rodas said that coordinated work for the Metro was clarified 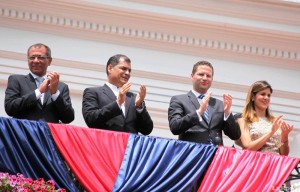 The proposal to refinance the Quito Subway was addressed this December 1 between Mayor Mauricio Rodas and President Rafael Correa. This happened after the change of guard at the Palacio de Carondelet.

In this activity, that was enlivened with music, according to Rodas, Correa confirmed to him he received the proposal to refinance this project, which has the financial support of the National Government, the Municipality of Quito and multilateral agencies.

“It was a short exchange of words, in this was made clear that it is a joint project that demands a coordinated effort to pull it off,” said Rodas.