President Correa denies the complete financing of the Quito subway 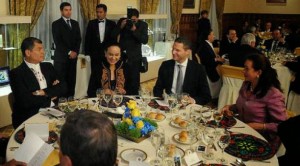 President Rafael Correa described on Wednesday December 3 as “incoherent” the funding proposal the Mayor of Quito,Mauricio Rodas, handed him on Monday, December 1 to continue with the Metro construction project for the capital and ratified that he will only allocate $ 750 million initially offered.

Correa suggested to the Municipality of Quito to apply the instruments with which it counts on to generate the missing $ 450 million, but he said the Government will not give him more resources.

“Mr. Mayor has presented to me on Monday a proposal that basically, with great elegance and courtesy, says to me: Hey!you pay the rest ($ 450 million); we have to be not very coherent, on one hand taxes are lowered, because that was hiscampaign offer and that’s what the people of Quito chose in the polls and we respect that decision, but we can not be inconsistent, we down taxes and  you pass me more money. The Municipality has instruments to generate more resources and finance whatever it takes for the Metro, we reaffirm us in the $ 750 million we always offered.”