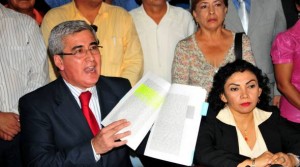 The defense of Professor Mery Zamora will submit a lawsuit against the Ecuadorian State to the Inter-American Commission on Human Rights (IACHR). This will be based on the moral damage, he says, caused by the four years the criminal process for sabotage and terrorism took.

In the final resolution, the judges confirm the declaration of Zamora´s innocence for the alleged suspension of public services.

Pedro Granja, Zamora´s attorney, said that once reported the fault, it will be applied the constitutional rule that determines that any revocation judgment of conviction requires the state to compensate the victim.

Granja added that next Tuesday they will propose the necessary demands in the national courts against President Rafael Correa, the prosecutor of the case and the judges who “unsubstantiated” condemned Zamora for the alleged moral damage.

With this, Granja noted that next June 18 they will resort to the IARCH. “We regret the words of the President against Judge Ayluardo, who will surely be punished by the judiciary because he is not forgiven for becoming in what every protectionist judge must be,” he said.