Mexican government will invest in train rehabilitation to control migration 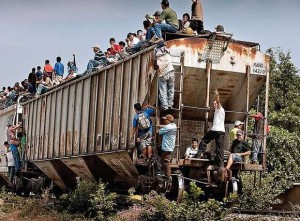 In order to prevent migrants board the freight train known as “The Beast”, in their attempt to reach the United States, the government of Mexico announced that it will invest about $ 450 million to rehabilitate the tracks of the aforementioned railway transport.

The government unveiled the details of the Southern Border Program announced in July, which includes an investment of 6,058 million pesos (US $ 450 million) between 2014 and 2018 to repair and maintain railway lines.

In addition, connectivity will be improved and it “will increase the average speed of the trains,” told to the press Carlos Almada López, Secretary of Transportation.

“We will strengthen the security in roads and railway facilities,” said for his part Humberto Mayans Canabal, Coordinator for Integral Migration on the Southern Border.

He added that there will be increased monitoring and use of technology to monitor the train as well as intelligence work to combat smugglers and gang related to this crime.