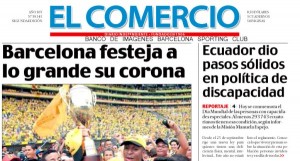 El Comercio newspaper, of Quito and with 107 years of existence, would have been sold to Mexican media tycoon Angel Gonzalez in a value close to 45 million, said the newspaper El Universo.

Unofficial sources indicated that the negotiations lasted about a year.

Sources close to Carlos Mantilla Batle, Director-General of the newspaper, reported that the sale was due to personal affairs.

The executive would have announced the transaction to the editorial team and workers two weeks ago.

El Universo said that Milagros Aguirre, columnist of the newspaper, reported that in a toast that was made in the institution for the Christmas and New Year celebration, the sale of the newspaper was announced.“It was a surprise. We were told that the main assets of the newspaper which are the freedom of expression and pluralism will remain,” said the journalist.

Carlos Mantilla would have told to the Guayaquil newspaper that next January the social media will issue an official pronouncement on the subject.