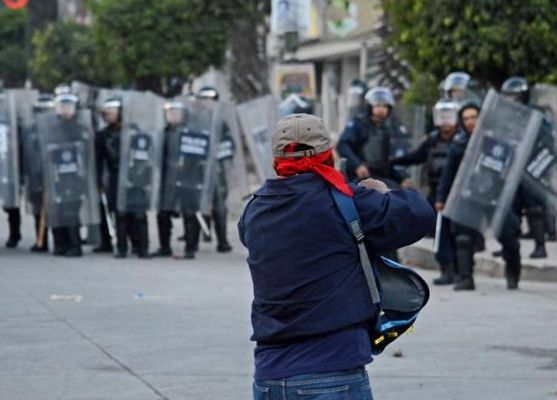 Violent clashes were registered on early Sunday between uniformed, hooded, unionized teachers and friends of the 43 missing  students since September.

The crash occurred in the Mexican state of Guerrero (south), during preparations for a concert to be held in solidarity with the cause of the 43 missing, where 21 people were injured, including seven federal police.

“From the Federal Police we have seven policemen injured and 14” civilians following the clashes in Chilpancingo, capital of Guerrero, told to local media the Commissioner General of the Federal Police, Enrique Galindo.

One of them is in serious conditions a after surgery “with traumatic brain injury” and another “received 12 to 14 lashes,” he said, adding that complaints were submitted to the Attorney General for these injuries.

In addition, a group of people with their faces covered, aboard seven trucks and armed with sticks, pipes and Molotov cocktails, “entered the hotel where a group of the Federal Police is hosted,” he said.