Mickey Rooney leaves $ 18,000 legacy to a family in conflict 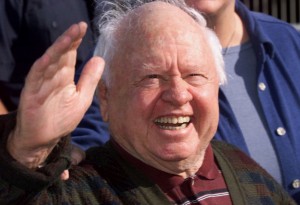 The son of the artist ensures that Rooney wanted to be buried in a veteran or Hollywood cemetery, while his wife claims his remains to be buried in the cemetery of Westlake Village, next to her

Actor Mickey Rooney, a mythical child figure of Hollywood, who died on April 6, at 93 years old in Los Angeles, just left a legacy of $ 18 000, according to Los Angeles Times, which also reports a family conflict for the remains of the artist.

Rooney, who died of natural causes, lived with his son Mark and his daughter in law, who now face in court against Jan Chamberlin, wife of the actor, and Christopher Aber, his stepson, in a struggle for the place where the burial will performed.

According to Michael Augustine, Heritage Manager of the actor, Rooney wanted to be buried in a Veteran or Hollywood artists cemetery. While Chamberlin says her husband wanted to rest at the cemetery of Westlake Village, next to her. Mickey Rooney and his eighth wife, Jan Chamberlin, lived separately since 2012, after he denounced his wife and stepson for mistreatment.