The military presence intensifies in the invaded lands on the Northwest area of Guayaquil. Over 700 soldiers protect the land and participate in the eviction that has been taking place for two straight days. 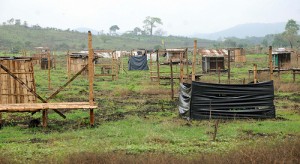 Residents from a sector known as Ciudad de Dios, which has a size of 9,700 hectares was declared a military reserve. They welcomed the Police Mayor of Guayas, Julio Cesar Quiñonez, who lead the operative against shouts that said, “Get out Correa,” “Lying President,” “traitor of the poor.”

Heavy machinery entered into the sector to destroy wooden houses that were recently built in the last week. Some residents began to dismantle what little they had constructed to save the materials. Military officials also knocked the sticks that separated the new houses.

The Police Mayor closed two stores that sold material, the shops belonged to Tony Estacio, who currently is a fugitive for trafficking land, Marco Solis is also accused with the same charges. Quiñonez visited the other sectors to hear the complaints of the people, and what they had to say regarding the lies of Correa, who had showed up on Tuesday to attend a mother whose child was a victim of crime.

The ministry of Housing, Walter Solis, stated that houses were constructed before and after December 28. The same day that president Correa offered housing and relocation to 5 thousand families, because of this announcement, new invaders arrived. The Municipality also evicted over 200 families on the sector of Los Cipreses in Duran.

State Legislators Against Automatic Citizenship in US